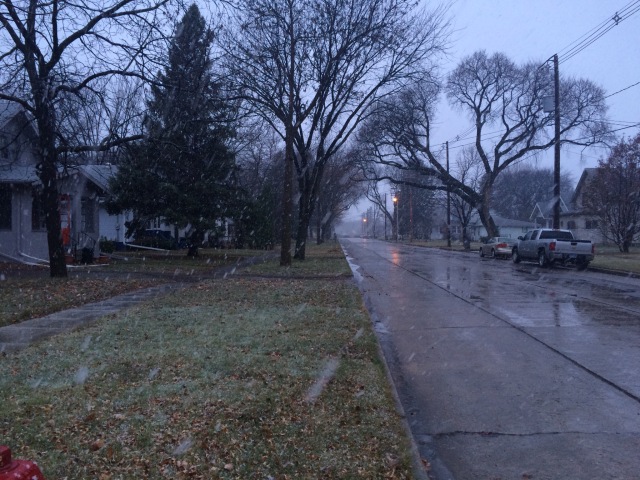 He pulled his overcoat tight against the wind. Snow whipped around him angrily, as though his presence annoyed the flakes. With the storm raging all about, he could barely see where he was going; he relied on memory to guide his steps. It had been many cycles of the moon since he had last made the trip, but his memory had to be sufficient.

Eventually, he did find his way to the shrine. It was set into an alcove, protecting him from the worst of the storm. The ritual was difficult in the best of conditions; he would need to be even more careful this time.

With the break provided by the alcove, setting up was not too difficult. The candles were large enough, and short enough, that they withstood the wind swirling about. Lighting them, though, was another story. Every time he got one lit, another would blow out. It took some time before he could get all of them to keep their flame.

The snow actually made tracing out the patterns easier. His first lines provided a guide to follow for repeating them. Before long, the shrine began to hum and then glow. Finally a voice boomed around him.

“Our village is in jeopardy. I seek a boon to see us through this winter.”

“A boon? And what will you pay for this boon?”

Pay? Something was wrong. “I do not understand.”

“Everything has a price, man. What is this worth to you?”

“You have never asked for payment to help us.”

“Really? When was the last time you were here?”

“It has been several years,” he admitted.

“Ah, that explains it. The spirit you used to deal with has left this place. I would suspect it was out of neglect.”

The village spirit was gone? He could only manage shocked silence.

“Very well. I will tell you my price. I will give you your boon. In return, you are to deliver to me one member of your village, who must be in their twentieth year or less. Bring them to this shrine.”

“I will do no such thing!” He could feel his cheeks getting hot.

“I told you, everything must be paid for. If you are not willing to do so, do not bother me with your requests.”

The glow of the shrine began to fade.

“Wait!” Panic began to rise in his throat. The village needed this. “What do you intend to do with the villager?”

“Do you really want to know?”

He decided that he did not. “No,” he muttered, embarrassed by his own intention. But he could not let the whole village suffer. If someone had to be sacrificed, it was better than all of them.

“So you agree to the price?”

He could barely manage a “yes.”

“And you understand the consequences of trying to cheat me?”

“Very well.” A fire sprang up in the middle of the shrine. “Reach in and take your boon.”

He extended his hand, expecting to be safe from the flames. He was not. Still, even as he stifled a yell, he grabbed a small stone from the fire before snatching his hand back and thrusting it into the snow for relief.

“Next time, do not question my price. Let the burn serve as a reminder. Ask only for that whose price you are prepared to pay.”

With that, the shrine’s glow vanished. He stood clutching the stone. The journey back to the village would not be long enough for him to find the words to explain the bargain he had struck. But what else could he do?